The North Carolina Annual Conference chapter of the Methodist Federation for Social Action and Reconciling United Methodists and Friends NC are proud to sponsor the annual Gayle Felton Love Thy Neighbor Reception on Friday, June 17th from 5pm to 7pm at the Holiday Inn in Greenville.

We decided to do something a little different this year ... a reception!

There will be food and refreshment available, and we will celebrate the life and legacy of the Reverend Dr. Gayle Felton who dedicated her life for a more inclusive society and church.

It will include both music and worship. Two awards will be given: The Gayle Felton Drum Major for Justice Award and the Jimmy Creech Award for Prophetic Ministry.

Space is limited so we do need an RSVP by June 13th. 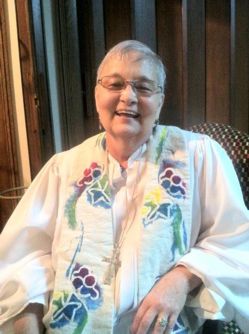 The lunch is named in memory of late Reverend Dr. Gayle Carlton Felton who passed in 2014 at the age of 71. She was champion for the rights of women, African Americans, and the LGBTQ community. Here is more about her

Gayle was a native of Pinetops, NC. She graduated with a B.A. in History from North Carolina Wesleyan College where she was the first valedictorian of the newly opened college. Gayle taught high school history and civics in Edgecombe County before answering the call to ministry.

She received her Master of Divinity and Doctorate degrees from Duke University. After teaching religion at Meredith College for two years, she returned to Duke where she taught in the Divinity School for over a decade, guiding and influencing a generation of pastors and others serving the United Methodist Church. Gayle’s scholarship largely focused on the history of Methodism with special emphasis on the sacraments.

Among her published works are This Gift of Water, By Water and the Spirit, This Holy Mystery, United Methodists and the Sacraments, and The Coming of Jesus. She was also the editor of How United Methodists Study Scripture and the writer of numerous studies and other works used across the United Methodist Church. She was a frequent participant in United Methodist General Conferences and was appointed for many years to the General Board of Discipleship.

Gayle had a deep commitment to social justice, working to integrate the public schools in Edgecombe County and as a pioneer in building the Reconciling Movement, a group advocating for the full inclusion of LGBT persons in the United Methodist Church. She was honored to serve as the national board chair of the Reconciling Ministries Network. Gayle also was a role model for women seeking ordination in the United Methodist Church, working tirelessly to remove many of the obstacles she herself had to overcome in becoming an ordained elder.